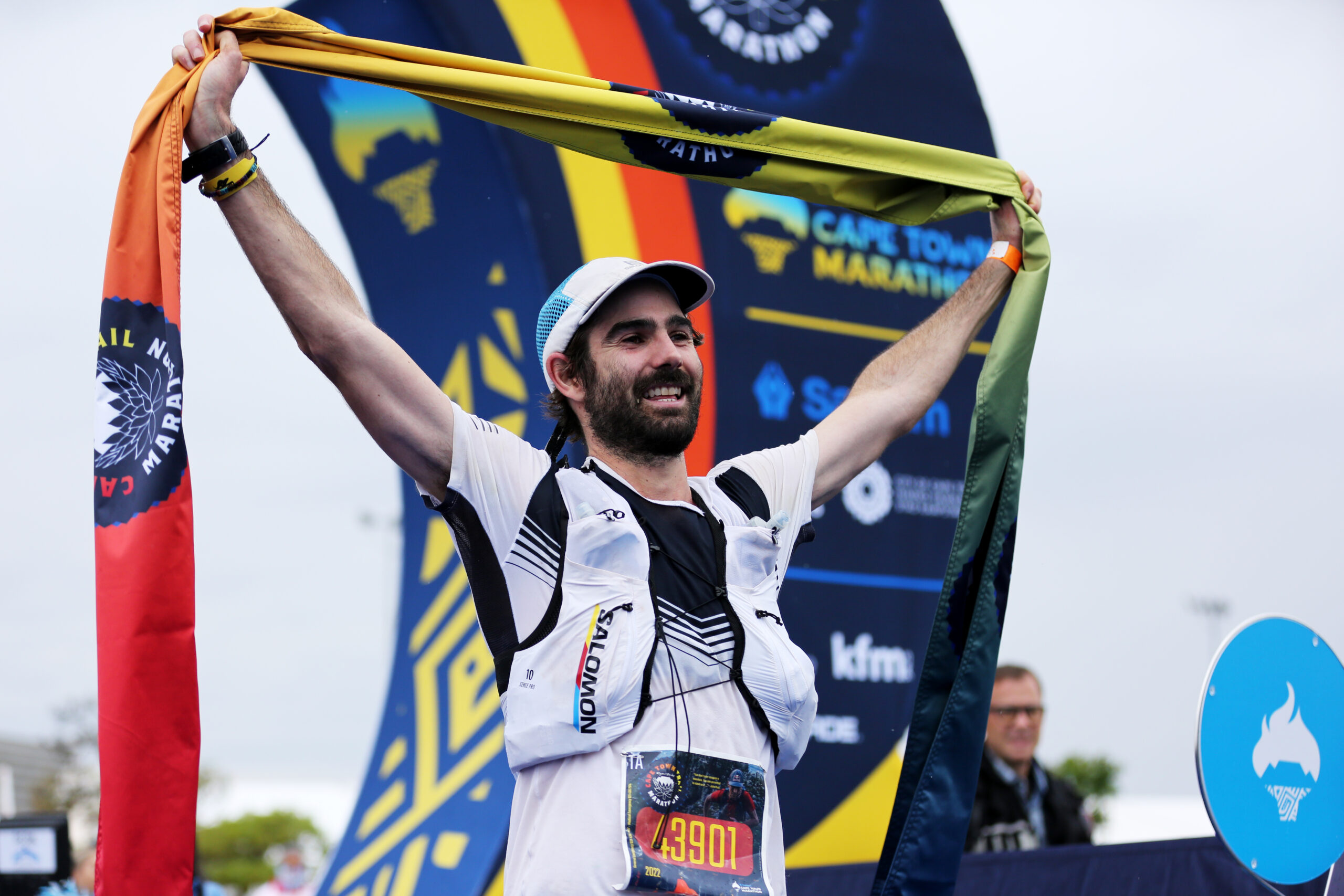 Runners stood beneath the shadow of Table Mountain during the early hours of the morning, and as the final countdown began, the sun crested over the horizon to set the racers off. The marathon distance race weaved out from the stadium, up along the contour path of Signal Hill, across Tafelberg road to the neck-craning Platteklip Gorge climb. Local legend and Salomon athlete, Kane Reilly set the pace from the start. Straight off the back of climbing and claiming Thursday’s VERT-challenge victory, Reilly summited the biggest climb in the route, tagging Maclear’s Beacon (the highest point in the race) to further the distance between himself and second-place athlete, Teboho Noosi.

Reilly acknowledged that his strength lies in “climbing,” and took full advantage of this strong point by tackling the route’s start-heavy climbs. Repeating to himself, “don’t run in fear,” Reilly admitted that the top guys regained the distance he had taken on them after submitting Maclears, coming down the mountain into Kirstenbosch. 2021 title holder, Johardt Van Heerden found his legs on this technical, downhill section and hot on Reilly’s heels (+1 minute behind), secured second place.

While the halfway mark was definitely the lowlight of Reilly’s race, he reminded himself that he “runs these mountains regularly and just needs to stay at an intensity he can handle.” His positive mindset and the route’s undulating ascent gave him the confidence to find his flow, regaining the distance between himself and this year’s competitive field of elites.

Running a very consistently strong race, Reilly added that he channelled close friend, elite athlete and iconic downhill runner, Robbie Rorich on the final descent. Reilly, running scared that Johardt would catch him on the last stretch, pushed to the end and crossed the finish line in 4:14:14; claiming first place and setting the new course record.

For elite Kane Reilly, Cape Town Trail Marathon 2022 was “one of those days where everything clicks, and running feels relatively simple.” Not only was Reilly able to “lock into the zone and find his flow,” but he shared this iconic day with his family en route. The trail-running family – Sister, Sam and mum, Maxine – cheered Reilly on from the Overseer’s hut, and even Harry (mum’s dog) got involved with some crew-running. His wife, Pipa and their 5-month-old son joined for high-fives along the way and cheered Reilly over the finish line after a challenging morning out. Racing home mountains and being supported by family and friends along the way made Kane Reilly’s victory that much more iconic.

The North Face athlete, Johardt Van Heerden, joined Reilly on the blue carpet with a second-place finish of 4:21:41. Straight off the back of a first-place podium at Otter the week before, Johardt admitted that this year’s event was extremely challenging and had him digging deep in the early stages of the race. While his original goal was to defend his 2021 Cape Town Marathon title, Johardt says he is extremely happy with his result. Not only did Johardt climb his way back up to the top leading men after a slightly wobbly start, but he worked through several moments of doubts and uncertainties of whether he was going to finish or not. Johardt said he ran into the stadium happily knowing that he would share the podium with Kane for a consecutive weekend and congratulated Reilly on a well-deserved victory.

Rounding off the men’s podium in 4:36:24 was international Adidas TERREX elite, Marcel Höche. Finishing off his European season in Cape Town, Marcel – referred to as ‘Pacy Macy,’ by teammates – is no stranger to the mother city’s technical trails; having set UTCT’s 35km course record in 2021 (3:34:25), Macy “intended to run with the front pack from the start.” Excited to push his race limits, Macy said a tumble early on in the race and struggling to get his heart rate up, set him back. Despite his delayed start, his nutrition strategy worked well and meant that he was able to progressively build, and climbed the ranks to push and hold onto third place. Macy’s highlights included the wild mountain weather, running sections of the incredibly dense-fynbos mountain alone, as well as support from his TERREX teammates along the course and at the finish line.

In the women’s elite field, Landie Greyling was first to cross the finish line in 5:24:23; an incredibly emotional and hard-earned win for the adidas athlete. Landie had set herself the goal of podiuming at the Cape Town Trail Marathon early in the year, training and working hard to turn her dream into a reality. Despite feeling confident at the start, Landie admitted that during the grind-up Platteklip and the first half of the race she “struggled to find her legs.” Feeling really weak, commenting that she “may have even tapered too hard,” Landie was led by Kerry-Ann Marshall up until the 30km mark. At the King’s Blockhouse, Landie found her legs on a section of the race’s route more suited to her style of running, flowy and fast, and overtaking Kerry-Ann, Landie flew into first-place position. Landie admits that her stronger second half and conservative start were perhaps a “saving grace.” She added that staying calm during her unintentionally slower start and reassuring herself about all her “hard work and sacrifices, as well as the crazy work, kids and life juggle,” carried her across the finish line.

The blue-carpet finish was so much more than a podium finish for Landie; sharing that she could not remember the “last time she was this emotional about a victory.” This win symbolised how far Landie had come after her second child was born – the many hours she put into the sport and herself to get back to where she was pre-pregnancy. Running into the stadium, “all the emotions came together;” overwhelmed by the support of her husband, Christaain Greyling, her family, friends, and the entire trail-running community; Landie said she was in complete awe… Cape Town Trail Marathon 2022 is a finish-line first-place she will forever remember.

Kerry-Ann Marshall, having fought long and hard all morning, came flying into second place shortly after Landie (+3:11 minutes). Finishing in 5:27:33 Kerry-Ann said her legs felt light and strong from the start, but sadly started cramping badly at roughly 18km. Having to adjust her pace, Landie overtook Kerry, but dropping to second did not stop Kerry from holding on until the very end. Kerry admits that her extreme cramps almost left her to “crawl off the mountain,” but holding her husband and kids at heart, she soldiered on. Kerry’s goal to run confidently and quicker than last year’s race was still achievable, and to run alongside Landie – a really great friend who she shares a healthy-competitive rivalry with – was incredibly special and one of Kerry’s notable highlights. Kerry notes that it was wonderful to “run alongside local and international legends, to compete and be a part of an indescribably special running community, to see so many familiar faces and feel embraced by the trail scene.”

Although it was not her sub 5:30:00 goal, Nicolette Griffioen ran an impressive 5:47:31 and claimed third place, completing the 2022 women’s elite podium. Despite a flu-set-back in her training and struggles balancing her nutrition, Nicolette ran an extremely consistent race, holding onto her 3rd place position from the start. The cooler weather and wild wind worked in Nicolette’s favour, and commenting on the beautiful flowering fynbos, she shared it was a privilege to run on Table Mountain again. While she had “forgotten how beautiful this mountain range is,” Nicollette equally admitted that she had “forgotten how tough,” the trails’ ascents and descents were. Cape Town’s unforgiving, undulating trails pushed Nicolette to her threshold and left her to cross the finish line full of relief. Despite not running the race she had hoped for, Nicolette gave it her best, and congratulated “Landie and Kerry-Anne on their absolutely well-deserved top spots.”

The last runner snuck over the finish line with 3-minutes to spare before the 4 pm cutoff and marked the close of the second-ever Cape Town Trail Marathon by Ryan Sandes. From navigating single-tracks, switch-backs, summiting mountain peaks to flowing through contour paths, to fist bumps at aid stations; runners finally arrived back where they started. After a long day out, 2022 racers returned home with more than just sweaty tees, blistered feet, tired legs, the odd scuffed knee, and a Speckbon-trophy-tree; but with memories from the miles their legs had carried, moments shared with their community of trail runners, and a typical trail-race-thirst for more…

A huge congratulations to all trail racers.